The Cross, the Gallows, and the Capitol: Part 4 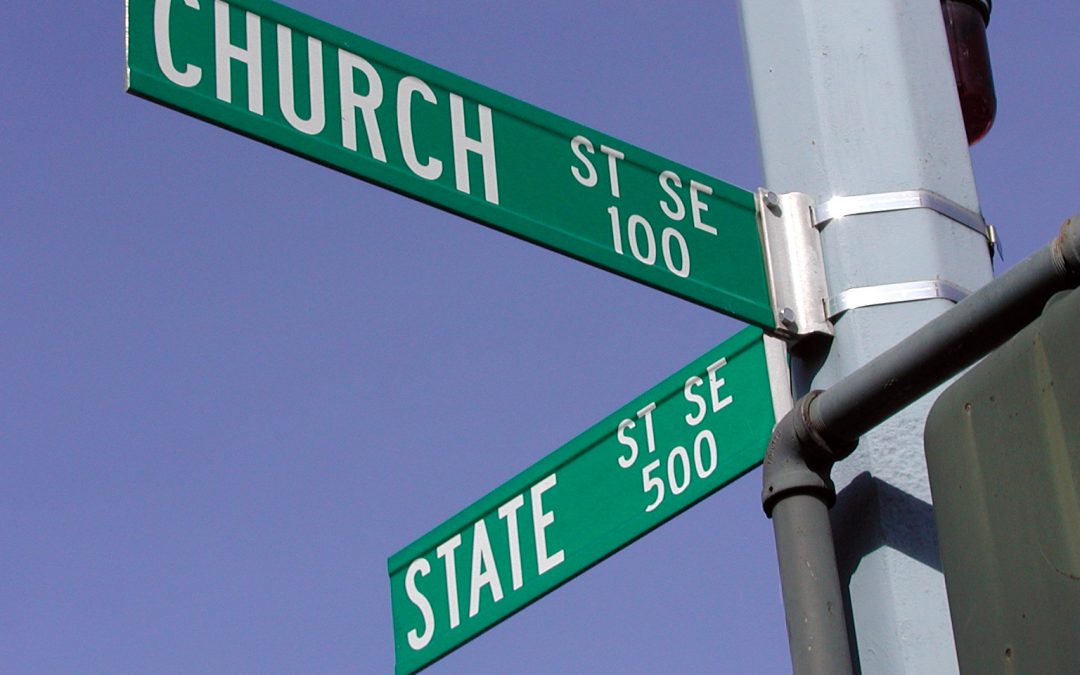 The two hands of God. Are church and state really separate?

Minutes after Senators were rushed out of the Senate chamber, part of the mob that stormed the Capitol made their way into that now empty room. Some riffled through desks while several men made their way to the presiding officer’s chair. A lone security guard said, “Any chance I could get you guys to leave the senate wing… cause this is like THE sacredest [sic] place”. Then a very strange but revealing episode took place, captured by veteran war correspondent Luke Mogelson

Standing on the raised platform that functions as a de facto “chancel” in that sacred space, one of the men looked upward, raised his fist, and shouted at the top of his lungs,

Then Jacob Chansley (the so called QAnon shaman) stood holding a US flag and called those present to a “say a prayer”.  His stream of consciousness concluded with:

This insurrection was not simply about politics or a person.  It was also a holy war.

The Church and the State

“Congress shall make no law respecting an establishment of religion, or prohibiting the free exercise thereof…” The “anti establishment” clause of the first amendment was intended to prevent the institutional consolidation of power between kings and priests. Thomas Jefferson would later expound upon the amendment in a letter to the Danbury Baptism association, saying it built “a wall of separation between church and state”. A short article on Jefferson’s views can be found at the Monticello website.

James Madison, also a fervent supporter of separating the powers of church and state, noted in a letter to Rev. F. L. Schaeffer that “the genius and courage of Luther led the way” to a system of distinction between “what is due to Caesar and what is due to God” and as practiced in America, allowed both the church and the state to better discharge their obligations. But “better” can be a very low bar since as President, Madison struggled to enforce anti slave-trade laws because slavery was being justified in the American South by both preachers and theologians of “the church”.

What was that thing Luther said?

Let’s be clear. The Reformation was a political revolution as much as a theological one. Luther benefitted from the protection he received from his local magistrate, Prince Fredrick III, Elector of Saxony, who was seeking to wrestle political power away from the Holy Roman Emperor. Thirty years of religious war followed.  Luther also tragically became involved in local politics when he argued nobles and landowners could use violence to put down a peasant uprising that demanded more individual rights and freedoms for laborers. Some 100,000 peasants were killed and it remains one of several stains upon Luther’s legacy.

Yet Luther had also worked out a way of understanding the relationship between church and state that came to be known as “two kingdoms” or the “two hands of God” although not in a particularly systematic way.  Luther was trying to make a distinction between “law and gospel” as modes of divine activity in the world. One the one hand, we live in a sinful world and God provides the law, constituted and enforced by the power of the state, to both punish the oppressor and provide justice for the oppressed. On the other hand, only God’s grace, proclaimed and administered through the sacramental nature of the Church, can renew and recreate the “inner person” in order to fulfill the higher law of love. One God, working in two distinct ways. Theologian Carl Braaten said, “The two-fold involvement of God means that, on the one hand, he [sic] works creatively to promote what is good for human life in all its personal and social dimensions and, on the other hand, he [sic] works redemptively to bring the world forward to that final redemption summed up in Christ.” -(Carl Braaten, Principles of Lutheran Theology, (Philadelphia: Fortress Press, 1983)  p. 134)

Humans take a nice idea and mess it up

Luther’s idea of distinction soon morphed into a practice of complete separation. History provides many examples of suffering that results from the notion of “separate but equal” whether in regards to racial groups or whole countries. Perhaps suffering is defined by separation.  One the most glaring tragedies is from Nazi Germany, where German churches, including Lutheran ones, enabled the rise of the Third Reich based upon their understanding that the state was a separate, divinely ordained  ‘kingdom’ from the church and they had no right to criticize it. The result was Nazi flags (the patriotic flag of the time) flying inside sanctuaries and only a small group of leaders willing to risk speaking out against the extreme nationalism and legalized persecution of the time.

In more recent history, various abuses by church bodies against children, women, or other groups was allowed to continue over the course of many years because the state was not allowed (or was unwilling) to get involved in affairs of the church.  But the church is comprised of sinful people and must also come under the authority of the state who can provide both punishment for the abuser and justice for the abused.

Clearly any notion that there should be a complete “wall of separation” between the spiritual life of people (value systems) and their lived experience experience in the world (political systems) is not compatible with the world we live in. Jefferson and Madison were concerned mostly with institutional separation, so that neither state or church could control the other.  Yet they also expressed their spiritual values in their politics and even enshrined some of them into our founding documents.  That all are “created equal and endowed by their Creator with certain unalienable rights” asserts a spiritual value.   So now what?

Let’s hear from another “Luther”

An excerpt from a sermon by Martin Luther King Jr. reads in part:

The church must be reminded that it is not the master or the servant of the state, but rather the conscience of the state. It must be the guide and the critic of the state, and never its tool. If the church does not recapture its prophetic zeal, it will become an irrelevant social club without moral or spiritual authority. If the church does not participate actively in the struggle for peace and for economic and racial justice, it will forfeit the loyalty of millions and cause men everywhere to say that it has atrophied its will. But if the church will free itself from the shackles of a deadening status quo, and, recovering its great historic mission, will speak and act fearlessly and insistently in terms of justice and peace, it will enkindle the imagination of mankind and fire the souls of men, imbuing them with a glowing and ardent love for truth, justice, and peace. Men far and near will know the church as a great fellowship of love that provides light and bread for lonely travelers at midnight.

MLK was speaking to churches like Lutherans and other white moderates, who were generally quiet and indifferent to the great social injustices around them. We were happy to send aid and relief to the needy but we chaffed at any critique of the state or the system of justice it was supposed to be enacting. Much of that hesitancy flows directly out of a misunderstanding of Luther’s ‘two-kingdoms’ thinking.

But MLK was also speaking to churches who were enabling racial and economic injustice by actively promoting a theology centered not in love… or truth… or justice…or peace but rather in the continuation of prejudice, lies, inequality and violence that maintained the status quo of one person’s superiority over another.  “This is our country” which by definition also means “it is not yours” even if you are a fellow citizen.  It’s not a new saying and too often religion has been used to justify it.

So back to those guys “praying”

My hope in this rather meandering post is two fold:

1.  To understand that the movement that infected people with lies about the election results and sent them to violently attack the Capitol, is not simply a political movement but also a deeply religious one that has long roots in American history and has been actively cultivated by religious leaders to this very day.  (That’s another whole post but needless to say it spans not only American Evangelicalism but also Catholics, other Protestants, and even a few non-Christian traditions)

2.  Despite Lutherans having some glaring failures when it comes to the intersection of church and state, we also have a way of thinking about them that can be helpful for today.  Both church and state, both theology and politics, are extensions of God’s activity among us. Yet in our hands, neither are perfect by any means. Good government, Luther said, is part of the “daily bread” we pray for in the Lord’s prayer. Perhaps the body image Luther used can still be helpful for us today.  God has, in effect, two hands that are distinct from one another.  Each does things on its own that the other cannot do.  YET, when they come together, even if in tension, they can work together for the common goal of justice and a greater peace for all people. Perhaps  then we will more fully realize God’s will… done on earth… as it is heaven.

What do you think?  What is the role of the church in relation to the state?  How should the state view the church?  Comments are welcome!  Join the conversation.